While I am not in the habit of forwarding other peoples posts, or letters, this email from the activist group “GetUp” highlights why Australian politics is so dirty.

The Politicians highlighted within this article and video, are some of the many people within politics in Australia who make our society so undemocratic. They need to go, so that Australian politics can become democratic again, and finally work for the needs of the people – not vested interests.

Here is the post and video – if you haven’t already seen it.

You may not know Federal MP George Christensen, but he’s got a habit of calling younames – “gutless green grubs”, “eco-terrorists” and, just last week, “bastards”.1, 2, 3

And you’re not the only one. He’s made headlines for calling women stupid, joking about gay people suffering from AIDS and for telling people to “jump on the first plane and head back to where you come from”.4, 5, 6

Not one to stop at hate-mongering, Mr Christensen is a fervent champion of the Adani coal mine, which, if built, will wreak irreversible damage on our Reef. And George has used his time in parliament to attack climate science as “fiction” and viciously block climate legislation.7, 8

But the worst part? George doesn’t work alone. Mr Christensen is part of a minority group of far-right MPs who wield enormous, disproportionate influence over our politics.

Well-connected in the mining industry and beloved by the big end of town, this group of Abbott-era crusaders works relentlessly to drag our politics to the right. Prime Minister Turnbull lacks the the power to stop their influence, but if we act together, we can make a difference.

That’s why, this election, GetUp members are going after them, in an ambitious plan to pare back their undue, dangerous influence. So Greg, without further adieu, click here to meet ‘The Blockers’… 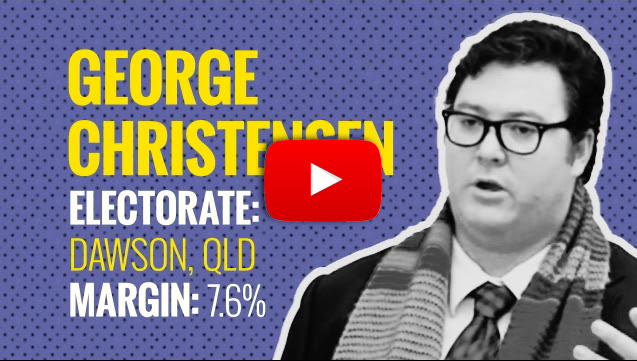 This campaign isn’t personal, despite the personalities involved. These MPs systematically undermine progress on those most urgent issues our movement fights for: respect for our multicultural communities, protection of Australia’s stunning environment, public funding for our local schools and hospitals.

Over 5,200 GetUp members have already kicked in an average donation of less than $40, to a $190,000 war chest to fund this ambitious election effort. The war chest is powering hyper-local campaigns in target electorates, thousands of phone calls to undecided voters, direct mail outs, digital, radio and print ads and over one million election day how-to-vote cards.

This is what a grassroots political revolution looks like – paid for by people, not corporate billionaires.

GetUp members are throwing everything they’ve got at unseating these hard-right ideologues – and the polling streaming in shows our national movement is turning the tide against them.

This election time, we’re doing the impossible – and it’s all thanks to people like you.

Paul, for the GetUp team

PS – GetUp’s how-to-vote cards have the power to change the election outcome for these blockers – but not without volunteers to hand them out to undecided voters on election day. Do you have a few hours spare on July 2? Click here to sign up to volunteer at your local booth.

About Blog of Greg

I consider myself a thinker and I like to discuss everything in life with those around me. Mostly I am serious, sometimes I am funny, and occasionally I am rude. I like to wear my heart on my sleeve and say what I feel, or think! It is important to me to be honest about how I feel and why! I detest pretense, big egos and self importance. I believe that I am no more important than you, and similarly that you are no more important than me! [apparently I should reflect on this more often] This blog is a way of engaging people in different aspects of life; its goal is to present a different view of life and contribute to a broadening of our awareness. While this blog is essentially my opinion, I also understand that there are other opinions out there. Though I encourage discussion, I may “delete” comments that I find are unhelpful, argumentative, or offensive towards myself or another person. Often I write about politics – apparently that is an interest of mine – but I also like to write about other more personal things that affect us in our day to day lives. Along with this blog, I also write to politicians and newspapers; I often present a commentary on my blog about following comments or decisions. That way everyone understands what they have said – and sometimes of course how big a buffoon they are:) Please feel free to comment on my posts, as I would like to hear what you have to say. After all…. Your opinion is just as valid as mine!
View all posts by Blog of Greg →
This entry was posted in Politics and tagged democracy, government, liberal, Liberal National Party, politics. Bookmark the permalink.